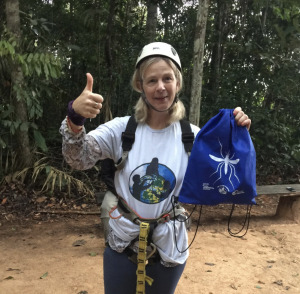 Dr. Becky Boger has been with GLOBE for 20 years! Read about the history that led to development of the GO Mosquito Habitat Mapper!

Rebecca Boger, Associate Professor at Brooklyn College, Geoscience/GIS, City University of New York (CUNY), has a background in geospatial technologies, environmental science, and science education. Before coming to Brooklyn College, she worked for at GLOBE with teams of scientists and educators to develop classroom materials, conduct workshops, and facilitate international collaborations.

With the passing of time, so has technology! Mobile devices such as smart phones are most everywhere! Collecting a location with a GPS is easy! Just use your smartphone. I worked with Dr. Rusty Low and we created a prototype app based on the GLOBE protocol. Then we tested the prototype with citizen scientists and GLOBE students in the US in the Caribbean. After prototyping, we collaborated with the data team who built the Mosquito Habitat Mapper on the GLOBE Observer platform. GLOBE teachers and students in Brazil and Peru are playing an important role in usability testing during the GO Mosquito Challenge.

I’m excited to see the data that is being collected and want to see how the data can be examined in conjunction with environmental data from satellites. One thing I’d like to explore is how we can use satellite data to better predict mosquito-borne disease outbreaks in urban environments. I live in urban Brooklyn and this has direct relevance. New York City is at the northern edge of where Aedes aegypti can live. Aedes albopictus is here, but no A aegypti have been found. With climate change and other factors that contribute to the spread of mosquitoes, it will be interesting to see if and when New York City has resident A. aegypti. Another topic that really interests me is more technology focused. I’m really interested to see how citizen scientists can use mobile technologies to mitigate and even prevent the spread of diseases.