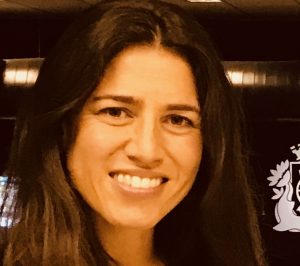 Renée Codsi – Biologist and Professor of Biology and Ecosystems and Societies.

I gamify data collection and youth action for conservation and public health issues. I am a scientist and professor of Biology and Ecosystems and Societies. I am interested in creating solutions to foster agency in underserved communities engaged in the advancing of climate justice as well as mitigation and adaptation due to the health impacts of social inequalities and climate change.

I started collaborating with GLOBE in 2002 in the middle east with students collecting valuable, rare data on the environmental impacts of war and climate change in the region. Since then, I moved to Europe, Southeast Asia and South America bringing the GLOBE program with me in my classes.

I was compelled to participate in a mosquito vector control citizen science project while teaching and doing research in Salvador da Bahía, Brazil.  This was the time that the Zika outbreak came to Brazil after the 2014 world cup. Our headmaster called an emergency meeting canceling everything and he shared the WHO announcement verifying that the Zika virus, a mosquito borne disease, causes microcephaly, the calcification of the developing fetal brain.  In addition, the Zika virus is not only spread by mosquitoes but it is also transmitted through sex and kissing. In response, the Brazilian Ministry of Health advised women not to get pregnant for the next year until the scientific community had more information regarding the behavior and ecology of the Zika virus. Everyone in the auditorium including my pregnant colleagues looked hopeless. We live in the tropics where mosquito bites are a part of life. I got bit every day in the cafeteria, how can we protect our students and our community?

The next day, I shared this information with my students. We repurposed the GLOBE landcover protocol and divided up the campus in spheres of influence where student teams would be in charge of removing mosquito breeding grounds on a daily basis. The students felt empowered, were engaged in science class, learned how to influence health of their community and became agents of change.

Dr. Rusty Low contacted me and said that she was working to make the GLOBE mosquito protocol a reality and they were making an app and wanted me to join the team. I was ecstatic and eager to collaborate with them on making the Mosquito Habitat Mapper citizen science community a reality.

I love this project because it not only engages youth to be agents of change for the health of their community, but the rare and valuable data they collect also helps the scientist understand the relationship between mosquito ecology and disease transmission on a local scale. Analysis of this data can be used by public health to guide their response to mosquito borne diseases, incorporating the impact of climate change, social inequalities and unplanned urbanization on health.

I want to investigate how gamification can help sustain youth in consistent data collection and mitigation of mosquito breeding sites as well as, ways of making this data useful for mosquito borne disease prevention.